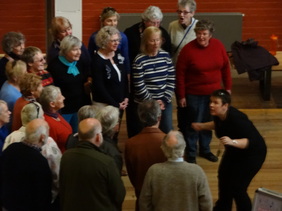 Flash Mob: A large group of people who assemble suddenly in a public place, perform an unusual action for a brief time, then quickly disperse.

The Flash Mob phenomenon continues to sweep the globe ... and here's your chance to sneak up on your conference delegates, corporate gathering, festival event crowd or any other group of people, with a 'Random Acts of Choirness' flash mob created especially for them.

We can organise a group of people to attend your event, posing as delegates or audience members or even 'coming out of nowhere' to sing for everyone.

We can also work with you if you'd like your own employees, students or conference delegates to become a flash mob group.  We can organise a rehearsal schedule, teach a song, and work with your group to plan a performance.

Click HERE to watch a video of our flashmob in the Mall in Hobart.  We've also coordinated about 100 performers to sing flash-mob sea shanties at the Australian Wooden Boat Festival (Hobart) in 2013.

To make an enquiry about our flash mob options, please contact us.  Please note that we usually need at least two months' notice (sometimes more) to organise a flash mob, given the logistics involved!