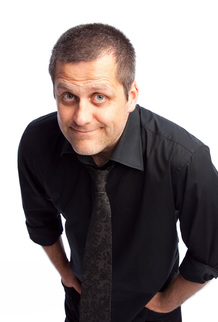 Gavin is a professional stand-up comedian, MC and workshop leader, with extensive performing, writing and producing experience. Gavin began his comedy career in Perth, Western Australia in 1999 as a national finalist in the RAW Comedy competition. He moved to Melbourne in 2000, and to Hobart in 2005.

Gavin's performing and production experience includes Jokers Comedy Club in Hobart, nine Melbourne International Comedy Festivals, numerous Hobart Comedy Festivals, the Wild West Comedy Festival in Perth, Taste Festivals, Laugh-Aid shows, quiz nights, many more corporate and community events, and even comedy clubs in Ireland and France. He has appeared on Channel 10's 7PM Project and The Comedy Channel's Stand-Up Australia, and has featured in a number of TV commercials. He has also been a regular guest on ABC radio and 7HO-FM radio in Hobart. He has also supported international comedians including Tommy Tiernan, Jeff Green and 'Weird Al' Yankovic. Since late 2012 he has also been performing on the high seas, as an on-board comedian with Carnival Cruises.

Gavin's public comedy workshops are regularly held in Hobart, Launceston, Melbourne and Perth, and he also specialises in corporate team-building comedy workshops. His jokes have featured in Readers Digest (2012), in the compilation book Funny Buggers (Penguin, 2011) and in a Zoo Weekly list of 101 best stand-up gags (June 2008).

Gavin's talents also include graphic design, web design, award-winning video editing/production and providing advice on all things technical when it comes to events!  Check out his website at www.gavinbaskerville.com, and also take some time to visit his online store - t-shirts, mugs, bags and other products printed with Gav's one-lines, puns, parodies and other witty remarks, under the brand 'Ranting Gav'.

You might also like to check out George Youngman - he's a dear friend and mentor of Gavin's (but strangely you never see them in the same place at the same time), and he's available for comedy performances too.